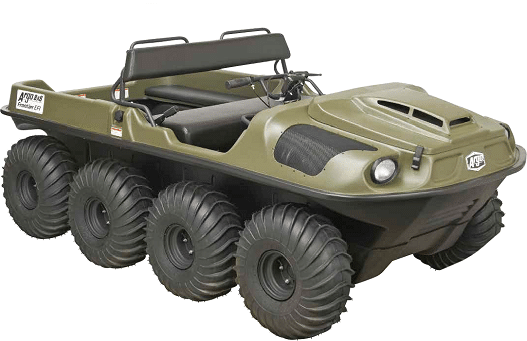 Perhaps you remember the 60’s, it was an important time in Australian history that shaped our culture. Did you know that ARGO began in the 60’s?

Before the Argo name existed, Ontario Drive & Gear Limited (ODG) was founded in the Canadian town of Kitchener in 1962, to make power transmission and gears for the North American market. ODG were, and still are transmissions experts that began manufacturing for an ATV called the Amphicat.

Soon after in 1967, ODG decided to introduce a 6-wheel amphibious vehicle of its own, and the Argo was born! In 1969, ODG moved to a 10-acre site in New Hamburg and began designing and building some of the industries most reliable and versatile amphibious vehicles. To the future!

In 1971 ODG did something new, introducing a ‘stretched’ version of the Argo ATV, an 8-wheeler with the greatest cargo capacity on the market. This first 8-wheeler was suitably powered by a 440cc Kohler engine.

But as is the Argo way, by continually looking for ways to better the Argo design, ODG also start switching to high-density polyethene materials for the vehicle bodies, and by 1975 were using Tecumseh 4-cycle engines. With the 4-cycle Argo, ODG’s market expanded from the recreational sector into the farming, utility, industrial and commercial sectors, where 90% of Argo vehicles are used today in Australia!

The 80’s in Australia were good times. In 1981 we saw the first Argo 8 I/C (industrial commercial) with hydraulic steering brakes. This ground-breaking model quickly captured 60% of the market in North America.

Then in 1985 the Argo 6 Twin was introduced, powered by the Briggs & Stratton, 656cc twin cylinder I/C engine while seeing the last Tecumseh equipped vehicles came off the assembly line. A new era began for ODG an in 1989, the 8×8 Magnum and the 6×6 Magnum, new top-of-the-line models with revolutionary clutch designs to increase top end land speed entered the market, exceeding many client’s expectations.

In 1992, ODG celebrated a proud 25 years of Argo production and in 1993, ODG introduced the Argo Conquest, the first liquid-cooled Argo using the Kawasaki FD620D 20hp V-twin engine. The Conquest captured the imagination of people like never before, and long lead times were challenge as demand far exceeded production rates.

The Argo 8×8 Response was then introduced in 1995, and the Bigfoot invaded the market in 1997, with an extended wheelbase to accommodate the 25″ tires, enhancing comfort over rough terrain.

With this new demand, ODG made a bold move and increased the New Hamburg manufacturing and office space by 40,000 square feet, further reflecting the Argo popularity and customer focus on quality and safety first.

Perhaps one of the biggest milestones for Argo as a company was in 2008 when we were asked to help the Canadian Space Agency design a vehicle to withstand conditions on the moon. Yes, the Lunar Rover!

And here we are in 2018, how times have changed! ODG’s focus has remained the same, to continue building the best amphibious vehicles in the world for farming, industry and recreation use. Argo ATVs leads the way when it comes to micro and hobby farming technology. Farmers are using Argo’s to safely and effectively cross difficult terrains like thick weeds, ice, mud, sand and even dams.

So to space and beyond, the focus for Argo now is on commercial markets, expanding into insect reduction, fire brigade search and rescues, mining site exploration with lifting and drilling, among many other industries that require versatile vehicles for harsh terrains.

Argo would also like to thank all of our amazing clients. It is only with your support that we have been able to build the best amphibious vehicles on the market, since the 60’s!

If you love the idea of having a new Argo for your farm, business, government department, or just for fun, contact the Argo team on 1300 731 082 or contact